Movie about Scientology on Channel 4 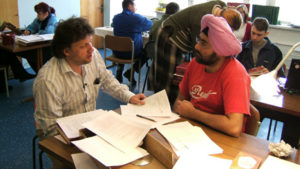 There are some interesting recent events I would like to keep you informed about.

At the end of January 2014 there was meeting near London to present Ron’s Org to the Free Zone Scientology community in the UK. About 25 people were present. It was a big success and it started to get the UK out of Non-ex. A few weeks later we were contacted by Channel 4. Channel 4 is a TV station in the UK which has a policy to show a certain number of religious programs. In line with that policy they are making three films: one about Hinduism, one about Islam and one about Scientology, each one lasting one hour.

They want to portray each religion by filming a person having their first contact with it and then going on to becoming a follower of the religion. There has been no problem doing so with Hinduism and Islam, but you can imagine that some difficulties have arisen with the church of Scientology! So they did it with us. The director was Simon Egan who won seven British Academy Film Awards in 2011 for “The King’s Speech”.

This is our KSW1 fundation for availability of the Tech to all.